An idyllic walk through cycling colours.

If the crazy colour palette in the header image looks familiar, you’ve either been looking at my past posts dealing with the birefringence of ice, or you remember playing with soap bubbles as a kid (of any age). Or maybe you played with oil slicks, they’re trippy too.

There’s a fancy physics reason for this, with soap film, oil slicks, and these ice photos, the colours are the result of light waves ‘destructively or constructively interfering’ in fun ways to get a spectrum ranging from black, to white, to a tobacco colour, through a classy mauve, over a deep sky blue then a warm yellow, past a pretty pink, then a lighter tasteful blue, finally more or less alternating between neon greens and pinks, becoming duller and duller with each cycle.

The mechanism enabling this interference with birefringent ice is not the same as with soap film, but the colour spectrum we get is, albeit arranged in radically different shapes (and far more static!).

Enough of my vague attempts at dodging the physics, lets just look at some photos of ice, organized roughly from top to bottom according to the colour scheme in the soap film shown above.

First up, nothing but black and white. No jaw dropping colours? What’s the point? Pretty shapes! A completely different aesthetic from the ‘in-your-face colour’ versions:

The next example is dabbling in the tobacco, mauve and blue bands, but keeps a heavy dose of white around for good measure:

Next up is a stronger showing of the first main band of colour, the tobacco, mauve, and deep to sky blue. I love these deep, rich tones, and when you get a suitable formation of ice you can zoom in on zones with gradual transitions for soft, pleasing shapes. This is one of the more saturated colour schemes, and the most ‘unreal’ looking, but no photoshop is necessary to enhance this icy beauty, just a pair of polarizers:

As a stark contrast in shape, up next is a jarring colour explosion. Featuring colours dipping into the next main band, namely a greener yellow with a dabbling of pretty pinks and greens, it’s quite shocking:

A closer look at some of these colours, and back to blockier shapes:

Shifty air bubbles, or eyes peering back at me? Paranoia is justified either way.

Jumping into the pinks and greens, the colour palette is softer, and more subtle. Understated, but still very pleasing.

Air bubbles in the ice can sometimes be an annoying mess, but other times, they can line up to add interesting textures and patterns. Or eyes.

These greens and pinks are not nearly as jarring as some of the super-saturated colours we’ve passed over. I find these cooler pastels calming, especially if they coincide with soothing patterns:

Referring to our soap film as a map, we’re now down into the alternating pink and green bands. As we travel too far down this spectrum, we head into duller colours, and eventually just plain white.

With soap film, the changing colours are due to the thickness of the film, and gravity can organize this very nicely into repeating bands.

Most of the ice I ‘make’ might be on the thin side and avoids the paler shades, it certainly lacks any organized descent into dullness when they do show themselves:

Or an even more randomly arranged variant: 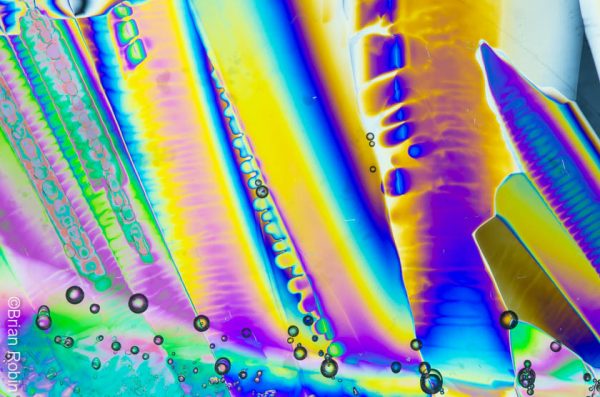 That said, I do enjoy descents into organized chaos, featuring as many wild shapes and colour ranges as possible. A bit of structured insanity is not without appeal:

Thank you for making it this far, even if you just rapidly scrolled through! If you’re interested in how these images were made, a few details can be found here and over here.

Have a colourful day!

One thought on “That Icy Birefringent Palette”