It glows! It glows! 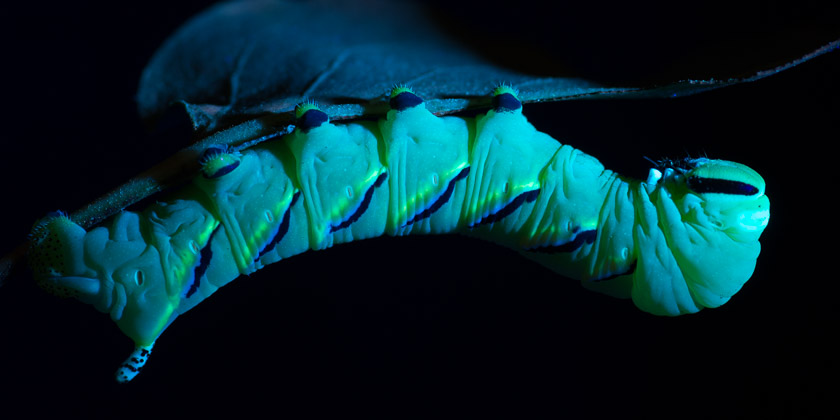 Ultraviolet light has a wavelength between 10 nanometers and 400 nanometers, this puts it below violet and indigo on our good old rainbow and outside of the visible light spectrum our eyes can detect. Good times happen when ultraviolet light hits certain materials – some cheerful objects will fluoresce and emit visible light when hit with these otherwise invisible rays.

Paper or fabric brighteners, glow sticks, many coloured plastics, some organic fluids – these will light up under the blacklights you see at nightclubs or the kinds of parties to which I am seldom invited. Caterpillars don’t get invited to these sorts of events either, which is a shame as some of them could teach us a thing or two about maintaining style under a UV light.

I first heard about ultraviolet induced fluorescence (UVIFL) and caterpillars a few years ago regarding Tomato Hornworms. Specifically it was a way locate them in your tomato garden – they glow under a UV light and are easy to spot at night if you bathe your garden in UV. The writer was concerned with protecting the tomato plants from the hornworms, my concern is to protect the hornworms from gardeners (I run a caterpillar witness protection program).

A few weeks ago we attended a Toronto Entomologists Association event at a butterfly farm, and one of the attendees, Alan Macnaughton, had a shiny new UV flashlight to test out on some caterpillars. This rekindled my interest in recklessly shining UV at everything, and a few days later I had one of my own on its way to my door. A different model from Alan’s, I opted for a Convoy S2+ which I had read about on the fantastic Extreme Macro photography website. Relatively inexpensive, this light puts out 365nm uv radiation and is strong enough for photographic purposes if your subject isn’t moving very fast. I like photographing slow things so it’s a good match.

I don’t have a Tomato Hornworm on hand this year (none in my tomato patch!), but I do have its cousin – a Laurel Sphinx Hornworm, Sphinx kalmiae, that stepped up to the plate as a test subject:

About 4cm long, this one still has some growing to do, its ‘horn’ was also a bit stubby. A nice test subject though – the yellow parts of the diagonal slashes, the white spots on its little legs, and the patch just behind this caterpillars head fluoresce quite nicely.

My UV light does give off a bit of visible purple and blue light, so this isn’t the ‘purest’ UVIFL photography, but it’s pretty decent (an appropriate filter to make it purer UV light is in the mail!). It’s also a fairly long exposure (half a second, f/8 and iso 400 for anyone keeping track) so actually a little dim to the eyes, but it makes them stand out against foliage in the night.

Finding caterpillars with a UV light is largely down to relative brightness and not up to them glowing like an eye-burning neon sign.

Next up is the caterpillar of a Yellow-shouldered Slug Moth, Lithacodes fasciola. These look like little green lumps and like to hide on the bottoms of green leaves. In the daytime, they’re basically invisible like most other green lumps that like to hang out on leaves. Under a UV at night… the chlorophyll of the Manitoba maple these were on fluoresce a weak red, the caterpillars a relatively bright green. The contrast makes them stand out like a hornworm at a rave and I found a couple dozen on this small weed tree:

Yes, this is a caterpillar that turns into a moth. Where are its legs? Its head? Any recognizable body parts? They’re rumoured to be tucked discretely underneath, and I haven’t gotten around to prying into its secrets. Another time!

For reference, here’s the adult version that turned up at my porch light July 2016, it’s in the general category of ‘flying teddy bears’:

Another example of the stunning contrast UVIFL can give is my Luna Moth, Actias luna, rearing bin. Here they are on the morning’s fresh pile of black walnut leaves as seen under visible and then UV light:

The walnut weakly fluoresces red compared to the caterpillars bright blue, especially some of their stripes and the back of their heads. This would be handy to find wild specimens, or to track down any escapees if they manage to organize a jailbreak (they literally spend the day lolling about on an endless pile of food, contentment is high, desire to flee is low, but there’s always one rebel in the group…).

Also interesting is the slightly brown one on the right – this is my first experience with this species but I understand its colour change indicates pupation is near. It looks unchanged under the UV.

This goes beyond critical applications such as rescuing hornworms, examining green lumps, or catching runaway silk moth caterpillars. Moths are not the only insects with glow-ready larva. Butterfly enthusiasts can rejoice, it works on Ontario’s most popular butterfly:

And those sometimes confused for Ontario’s most popular butterfly:

It’s also not just Lepidoptera caterpillars that fluoresce, I’ve been aiming it at just about everything to see what I can now see, but for now I’ll concentrate on a few Lepidoptera related by-products.

In all its glowing glory, I give you Actias luna frass:

To be determined – why some glows red and some glows blue. It’s what they excreted overnight, so of a similar vintage, and they’re all on the same diet and exercise program.

It turns out the eggs of the Cecropia Moth, Hyalaphora cecropia, also glow:

And so does this freshly spun Cecropia cocoon and silk:

I’m rearing several Cecropias in plastic tubs and it’s cocooning time, so it was no great effort to find this cocoon. When fall hits us and the leaves drop, UV might be a handy method for surveying for these silken refuges amidst the tree branches where the pupa ride out our freezing winters to emerge as glorious moths the following year.

One of my Cecropias started spinning his winter home on the sidewall of a clear plastic container, here’s the view from the outside of the box:

That’s it for caterpillars (for now!).

Some quick photography tips if you’re trying this at home:

And a final suggestion:

I hoard objects or insects I’ve found that warrant closer inspection or photographs. They are all ‘pre-perished’ critters I’ve found stuck in places or run over by larger critters, or occasionally parts living critters no longer have use for (exuviae, or shed exoskeletons, being nice finds). It can give you subjects to photograph during winter and doubles as a trap for unwary drawer snoopers.

So it turns out I do have a Tomato Hornworm to photograph, or at least the moth it becomes. Here’s a dead Manduca quinquemaculata from last year, but still, it glows on…